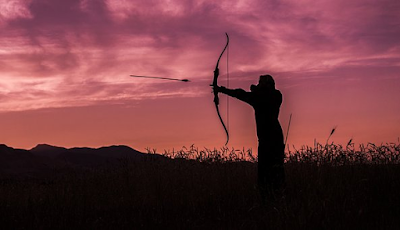 The writer of Proverbs said, "Keep your heart with all diligence, for out of it spring the issues of life." So, that wise writer advises us to watch out for the condition of our heart "with all diligence." But it would seem that such scrutiny and self-discipline are not a priority for most in the country today.

As a result, the collective heart of our nation has become degraded. It is a simple matter of mathematics. Within a nation there are many individual hearts which, when taken together, create a kind of "composite national heart." And the big numbers are on the side of baseness these days.

However, I was once told that, in one way, it is safer to hunt a lion with a bow and arrow than with a gun. (Stay with me here. I know that last turn was a tight one, but we gotta' go to Africa, just for a minute to finish this conversation.)

It seems that if the archer is off the mark, the lion sees the arrow that has wounded him and attacks the arrow, believing it to be the source of his trouble. So, the archer stays safe.

But, in the case of the gun, if the shot is not well placed, the lion will turn and attack the hunter. Because he cannot see the bullet, he attributes his pain to the right source.

The point? To solve our national problems, we must stop merely attacking the arrow. It may be the source of our pain, but it is not the root of our problem. We certainly have to take care of practical, everyday political and fiscal concerns; but, we must never forget that those things are only "the arrows."

The real source of our trouble lies within ourselves. The issues of life, as the proverb says, always, in reality, revolve around the condition of the heart. There would have been no Enron debacle had the CEO of the company simply had a good heart.

There would have been no need for a Wall Street bailout, if the Wall Street players were well governed within. Fanny Mae, and Freddy Mac, and the Social Security Trust Fund would be perfectly healthy today if good hearts had been directing and managing those institutions.

When you think about it, a nation of people not governed in their hearts is not really governed at all. If we only behave and do the right thing when someone is looking, with what then are we left. We are left with the necessity of a police state.

But, in fact, even then, we cannot hire enough policemen; we cannot pass enough laws; we cannot form enough oversight committees to govern a nation that has no inner, heart government.

It is not the constitution and the laws of this republic which distinguish it and make it great. It is the righteous hearts which embrace and honor those things.

Our basic instinct is, of course, to take the most direct action to stop our pain. So, we just "attack the arrow." We make up our minds to hire and fire our politicians. We develop new economic strategies, etc. etc., etc.

But, in reality, we don’t have a political problem (though we do). We don’t have economic problems (though we obviously do). But, what we have first is a heart problem.

We are not well governed within, as a people. And, until we are, no matter how intensely we wrestle with the "arrows," the pain will just keep on coming.

How do you stop the demise of a nation? You point it back to God, the Fixer of Hearts, and let Him do His work on a national scale. This may not seem the most direct solution; but, in fact, it is the only course which will correct the mathematics of good and evil in the national heart.