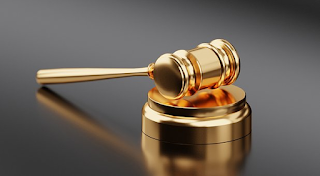 There was a low tide of quiet conversations in the court room as Judge History entered the vast chamber.   The room quieted immediately until the bailiff roared, “All rise.”

“Be seated,” the judge said before some could even get to their feet.  But, that was Judge History.  He was always considerate of the facts and the people in his court.  But, he was also a very no-nonsense kind of guy.  Pomp was just not one of his favorite things.  He was much more about substance.

The judge took a very long, silent moment to carefully take in the entire room - the onlookers, as well as the plaintiff and the defendant.  And, the litigants garnered, by far, the most of his attention.  He said nothing to either.  But, he stared at each for what their body language indicated to be a very uncomfortable moment in both cases.

Finally, the aged judge spoke with a distinct tone of authority, “You are all here today to receive my ruling regarding the defendant’s conduct, and by extension, his character.  He stands accused by the plaintiff of being an oppressor, and initiating unnecessary restrictions to personal expression and freedom in society.  He is also accused by the plaintiff of intentionally creating an overly demanding atmosphere in the culture.

“I have now, over a significant period of time, conducted a careful examination of the facts offered in this case; and I am ready to render my ruling.  However, because of the length of time involved in deciding this case, I am, first, going to review the essentials of the case for all present here today and for the benefit of summary in the official record.

“As you all know, this is the Court of the Generations.  We do not try individuals here.  We try whole groups of people as defined by their time.  Typically, when a case comes to my court, it is set before a jury of previous generations which have the benefit of experience and wisdom, and the better view provided by the high vantage point of the long past.  And, in that setting, we decide the real worth of a generation.

“But today is different.  Today, a younger generation, the plaintiff, Generation Me, has accused an older generation, G-Prime, also known as “The Greatest Generation” of essentially outliving its time.

“The younger, at this point, is little more than an infant social experiment with, as yet, no real track record of his own.   Nevertheless, he has asked that this court would declare the life philosophy of the defendant, G-Prime, to be now, ‘Irrelevant and Non-viable.’  The plaintiff has further requested of the court that, pursuant to this adjudication, the philosophy of the Me Generation would be assigned the legal status of ‘Ascendant Philosophy’ for this contemporary period.

“The Me Generation’s interest in this legal decree stems from the desire to more fully implement, in this present period, his own philosophy, which has come to be known as the ‘Expedient Life-approach.'  He acknowledges that this approach is brand new and untried.  Nevertheless the plaintiff contends that it will serve the present and succeeding generations far better than the antiquated philosophy of Generation Prime – heretofore known as ‘The Principled Life-approach.’

“In the consideration of this case, I have necessarily studied both approaches very carefully.  As a result, I have been able to reduce both philosophies to their prime tenets and their extant societal products.

“I will begin with the Expedient Approach of the plaintiff, the Me Generation.  As the name of his approach indicates, the Me Generation holds a very loose and liberal view of life, feeling no responsibility to anything which has gone before.  The prime tenet of this approach is very simple.  It is this, ‘Everything in life is subject to the whim of my convenience.’

“And then, there is the old man’s way.  The Responsible Approach of G-Prime is one of selflessness, duty, honor, and faith.  The prime tenet of this approach is also simple.  It is this, ‘Seek out and obey the higher good - always.’

“As a result of this powerful commitment, Generation Prime has expected a great deal of himself.  He has required of himself discipline, principled living, charity, and a true faithfulness to high levels of responsibility.  In his time, he has often even made the ultimate sacrifice in service to the greater good.

“So, after having compared the philosophies of these two generations, this court is ready to hand down its ruling.  And I would begin this way.  Never in all my days of judging the generations of men, have I noted such arrogance and insolence as in the plaintiff of this case, the Me Generation.”

At that statement, the plaintiff visibly bristled.  But, Judge History was having none of that.  He pointed his large, thick, and very authoritative finger at the plaintiff as if to say, "Be very careful what you do or say next.”  At this gesture, the plaintiff melted back into his seat without a word; and the judge continued.

“This unmotivated and self-absorbed generation is nothing more than a whippersnapper.  And, while thinking himself to be so ‘special,’ in truth, he is completely unimpressive, merely living a pretense of maturity like some teenager who still sleeps with his teddy bear.  With few notable exceptions, by any objective standard, the plaintiff has amounted to nothing more than a spoiled brat with technology for a toy.

“The Me Generation only ever measures himself, by himself; so, he has a world view no bigger than himself.   As a result he knows nearly nothing of the past; nor does he see where he’s going, or the larger and longer impact of his actions.

“Even now, his childish, Expedient Approach to life is eating away at the vitality of the very societies which sustain him.  It is destroying the time tested values which have provided mankind with a positive vector from the beginning of his existence.

“This untempered approach of the plaintiff allows for no universal principals by which human behavior can be gauged or governed going forward.  His approach asks nothing of humanity, and produces nothing of enduring worth in humanity – no quality of character, no principled conduct, no self-discipline, and no worthy ideals.

“Rather, it steers human kind directly toward baseness, minimalism, and selfishness.  I can easily predict that, if left unchecked, under the influence of this philosophy, humanity will soon completely lose its way.”

Judge History then locked eyes directly on the Me Generation; and with a withering stare, he uttered these words.  “Young Sir, you are a very great fool!

“Sadly, it is not  the prerogative of this court to pronounce judgment upon you at this time – else I would gladly do so.  But, know this:  your time is coming.  You will be back in my court, as are all generations.

“And you will be measured, not by yourself, as you so foolishly choose to do today.  But you will be judged by the wisdom of God and all the ages.  And, I already know that you, with your small and self-indulgent approach, will fail that judgment.

“And when you do, I will take great pleasure, before God and all of the generations of time, in setting The Great Record straight by pronouncing yours to be, indeed, a generations of fools.  And I will do so with this justification:  You could not even recognize the worth of the noble example which was just ahead of you - and simply emulate it.”

And then Judge History turned to the defendant, The Greatest Generation, G-Prime.  “Sir,” he said with a note of deep respect in his voice, “I regret that you have been so misjudged by this whippersnapper generation.  But, this court does not misjudge you.

“You are, indeed, a generation set apart, a generation who has set the bar for all generations.  And this court happily affirms, this day, your worthiness, your nobility, the continuing worth and viability of your approach to life, and your honored place among the generations.  And it is yet our hope that this young upstart, and many to follow him, may finally recognize and employ your majestic ways.”

And with that, Judge History dropped his gavel and announced, “Case, dismissed.”