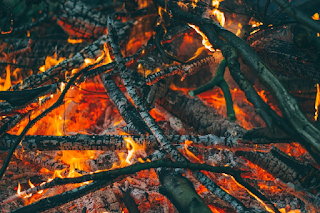 Long ago, in a perfect place, a voice was heard making promises. It was a smooth voice, as articulate as a scholar, and as affable as a pleasant friend. Essentially, it said this, "I can show you a better way forward. All you have to do is believe in yourself. Then, you can cast off the old paradigms, with all of their restrictions, and embrace a new truth which will place your destiny firmly in your own hands and change everything."

And that treacherous voice was, in part, exactly right. Everything did change. Paradise was immediately lost. Mankind became entirely broken - and broken hearted. Death became an invariable part of the human existence. And real access to God was lost.

And, no doubt, at the end of it all, that same dark voice could be heard laughing a sinister laugh of sarcastic satisfaction. "See," the serpent must certainly have quipped to the first couple, "everything has changed, just as I promised. Enjoy." And, for the first time, mankind tasted the deep bitterness of what it is to be a very great fool.

I hold a simple world view. It goes like this: "There are really just two primary influences in the world." One is God’s. His influence is the expression of all that is good, and descent, and worthy, and holy in life. The Godly influence always promotes an agenda of true and pure goodness.

The second primary influence is Satan’s. It is always dark and deceptive, employing treacherous tactics to enable the subversive purposes of evil. This Satanic influence is never straightforward, or honest, or truthful.

So, these two influences, with their opposing agendas, are really the only two basic influences in the world. The rest of us are merely subscribers and/or amplifiers to one or the other of these.

It doesn’t really matter if we are a president, a pauper, a pinhead or a patriot. Whenever any of us express our own influence upon our world, verbally or otherwise, we are really only identifying with one or the other of these two primary voices and their respective agendas of good or evil.

I came to this ingenious way of sorting things out because of something Jesus said in the Gospel of John, chapter 8. There, He said to some who could not grasp His point of view, "You are of your father the devil, and the desires of your father you want to do. He was a murderer from the beginning, and does not stand in the truth, because there is no truth in him. When he speaks a lie, he speaks from his own resources, for he is a liar and the father of it... And if I tell the truth, why do you not believe Me? He who is of God hears God's words; therefore you do not hear, because you are not of God."

Now, I know that to share this simple binary world view with Jesus is to do so at the expense of my own credibility with some people. And that is especially the case with those elitists who fancy themselves the more sophisticated thinkers of our time, the world’s unassailable "higher consciousness," and thus, the best intellectual hope of the species. However, my thinking is that, at the point of that last conclusion, they may want to look toward their own credibility, rather than bother with assessing mine.

But, be that as it may, here is what I know. The Darkness has 3 kinds of "children". Some are very aware and committed to the causes of Satan. They are the true devotees to the dark agenda. They understand perfectly, the hatefulness, the violence, and the treachery with which they are involved. And, they are deeply committed to getting it done.

Then there are others who are merely "fellow travelers" with the dark crowd. These cohorts are not quite so aware or committed, but they have some vested interest in the darkness. These subscribers often couldn’t care less about good and evil, moral or immoral. They really don’t care whose voice they are listening to or following, as long as it promises prosperity etc. So, for the possibility of some momentary gratification, they will ride anybody’s bus - even Satan’s.

And still others in our culture are simply the dupes of the Darkness. These are the naïve’ and the deluded. These are the poor, sad creatures who sincerely believe themselves to be children of light, people of the higher conscience. They have no idea that they are actually serving the dark agency.

So, these well-intentioned people are drawn in by noble and conscientious endeavors which they can heartily believe in. But, whether by choice or delusion, they never quite come to see the other end of the dark influence which advocates for the killing of innocent unborns, for example, or the legitimizing of immoralities like homosexuality and gay marriage. Indeed, their ignorance makes them completely the dupes of the Darkness.

So, Jesus has it right. In our American culture, as in every other, there are those, of whatever level of commitment, who loyally follow this articulate, high sounding, and affable voice of the Darkness. And, as the children of the Darkness, they quickly dismiss the divine ideas of right and wrong, to enlarge their own.

Nevertheless, using the simple lens through which Jesus and I view the world, it becomes easy to distinguish the light of God’s graceful impact from the darkness of Satanic treachery. And, in doing so, one thing becomes very obvious.

If the present culture does not alter its present level of involvement with the Darkness, we are very certainly destined to hear that sinister Satanic laugh once again.

One more time, that gloating, sarcastic voice will surely utter, over the smoldering ash heap of our national greatness, "See, everything is changed, just as I promised." And one more time, we in America will taste the deep bitterness of what it means to be a very great fool. May God forbid.
Posted by Larry Burnett at 12:02 PM