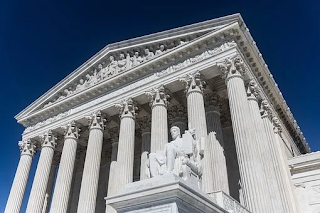 Recently the Supreme Court ruled that the President had no standing regarding fraud in the 2020 election.  How completely lame.  It is impossible for me to imagine a circumstance where the President of the United States would not “have standing,” on any issue which he chooses to raise - based in the sheer gravity of his office.  So, sadly, my cynical side now suggests that there are more sinister forces than mere legalities at work within the present high court.  And, in that case, I think the court should be reminded of what has ever been a defining American ideal.  It’s “courage.”

Our soldiers, our first responders, and the vast majority of our ordinary citizens all regularly face down life’s most fearful intimidations.  They choose courage to be the ideal which first defines them.  They do not typically even attempt to conveniently invoke some such cowardly approach which suddenly makes them mere spectators to life.  Rather, they insist on being people who very purposefully attempt to shape life for the better – every day – come what may.  I am, today, so profoundly sorry that this present court is apparently not cut from that same cloth.

In fact, all but the most naïve among us, now know that The American Republic was mortally wounded on November 3rd by seditious political criminals who very methodically corrupted our election process.  And, they have now done so with impunity, thus insuring they will repeat their formula in all future elections.

As a result, the failure of our republic is now completely imminent – though it would seem that most, even now, have not comprehended that reality. But, the nullification of its election process is the sure death knell of even the most vibrant democracy. Elections then become merely a way to legitimize unending dictatorial power.  And, this is what has been essentially achieved, in this 2020 election by these seditious criminals.

Nevertheless, at this critical moment in history, the court has chosen to make America’s Lady Justice “blind,” in a new and very ignoble way.  To my eye, her blindfold no longer signifies Fairness – but Cowardice.
Posted by Larry Burnett at 12:09 PM