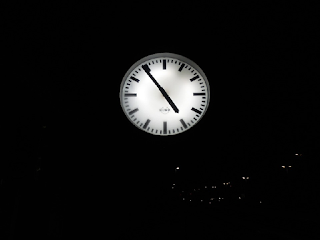 There are two realities which we must embrace in this life in order to “get it right.” First we should embrace the reality that God is holy. And second, we should understand that humanity remains always accountable to His holy value system.

So, “The Big Drama” tends to go down like this. In America, we have many people who, like unruly children at play on a long summer day, have somehow dismissed the fact that "Dad" will be home at five o’clock. So, as the day wears on, they simply ignore his established rules for the family.

And, when mother Wisdom attempts to correct them in order to save them from later punishment - nothing doing. They only become more incorrigible, choosing still to ignore the five o’clock realities.

Why, because, for them, they are not realities. They are merely the idle threats of a prudish old woman with antique ideas and not one clue when it comes to having "real fun" in life.

So, they write off Wisdom. And they write off the rules. And, they do as they please, and all the more so as the day wears on, eventually throwing out even their respect for the Rule Maker.

Thus, is the big disconnect in this present American culture. It is a widespread kind of mental oblivion when it comes to God's governing values. In fact, we have many "wayward children" who have so far dismissed the Rule Maker from their personal world view that He is simply a non-issue for them.

So, for example, these disobedient children have no reservations about throwing off the God defined sexual mores’. Thus, they easily embrace twisted, and base sexual behavior as in same sex pairings.

These "care free" citizens often think it fine to murder children in their mother’s womb as a matter of personal convenience. They tend to believe it better to live by the expedient of the moment than by any divine rule.

And, this great disconnect has, indeed, broadly touched our culture. Thus, in every venue of our national life, we are now divided by the vastly differing values between those who embrace a Holy God and those who don't.

And because of this division in America - for now - there is no longer a universally recognized moral referee. Nor is there any longer an argument-settling set of values, such as we once knew through God's preeminence in the nation.

And sadly - for now - there is no decisive way to expose the folley of these wayward children of the darkness. There is no way to win the intellectual argument of right and wrong with them. Their arrogant disconnect with the truth, and the authority behind it, is so complete that there is simply no basis for explanation. They have so thoroughly replaced the divine value system with the confused concoctions of their own "higher conscience" that God's truth has become incomprehensible to them.

So - for now – we are left with only this maddening stalemate between the enlightened values of God and the dark values of the disconnected. Yet, there remain two possibilities for breaking this stalemate and once again establishing God's truth in the nation.

The first is the possibility of a Spiritual Revival in the country. We can always hope, and we should already be praying that the Holy Spirit would sweep over our land to once again refresh a national embrace of our Creator and His holy values. And, this is certainly the course which faith and true charity would choose.

However, this failing, the alternative means of correction remains eminent. And this alternative has nothing to do with a voluntary response. It has only to do with the hour.  The reality is - It's almost "five o’clock."
Posted by Larry Burnett at 9:40 AM